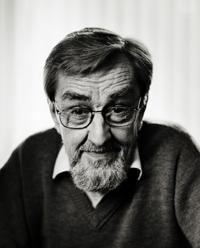 Axel grew up in Paris in a wealthy Danish manufacturer's family. He moved to Denmark at age 16 after the family's economic collapse. The same year, he enrolled in the Askov School of Woodworking to learn Danish and later to train as a cabinetmaker.

In 1942 Axel was admitted to the acting school at the Royal Danish Theatre in Copenhagen. After graduating in 1945, he returned to France where he spent five years on stage in Paris, including at the Théâtre de L¿Athéné under the legendary theatre director Louis Jouvet.

In 1948 Axel married Lucie, a Frenchwoman, and in 1950 they moved to Denmark. Axel broke through as a stage director in the early 1950s. His productions included Marcel Aymé's "Other People's Heads," Pierre Corneille's "The Cid" and Jean Giraudoux's "Duel of Angels."

Axel started directing for television in 1951, the very first year of TV broadcasting in Denmark. Up to 1968, he directed 48 televised dramas.

From 1955, Axel was a director at Nordisk Film. His debut feature, the social-realist drama "Nothing But Trouble" (1955), was highly praised. He went on to direct a string of comedies and farces before making the epic Nordic saga "The Red Mantle" in 1967, which was selected for Cannes competition the same year and won a Technical Grand Prize Special Mention.

In 1987, Axel returned to Denmark to direct what had been his dream project for over 15 years, an adaptation of Karen Blixen's "Babette's Feast." After screening at the Cannes film festival, the film became a worldwide success and won the 1988 Oscar for Best Foreign Language Film. His next films -- the youth drama "Christian" (1989); the historical drama "Royal Deceit" (also known as "Prince of Jutland", 1994), after the legend of Prince Amleth, and starring Helen Mirren, Gabriel Byrne and Christian Bale; and "Laïla the Pure" (2001), a love story set in Morocco -- failed to achieve the same international resonance.

Alongside his directing career, Axel starred in a dozen Danish films, mostly in colourful supporting roles in popular comedies in the 1950s and 60s. He played the lead as the elegant charlatan in "I, a Nobleman" (also known as "The Reluctant Sadist," 1967).

In the 1980s two Danish films win the Oscar for best international film. A humanistic realism characterizes the period's films, which depict every day people anchored in a recognizable Danish

In the 1950s the melodrama returns with the popular Morten Korch film adaptations and the Father of Four (Far til fire) family films. Another direction pursued in the 50s is problem-oriented films,

11. feb 2014 | IN MEMORIAM. Gabriel Axel – half Danish, half French, all passion – lived to be 95. Morten Piil, long-time film critic at the Information daily, remembers the late director, who won an Oscar in 1988 for "Babette